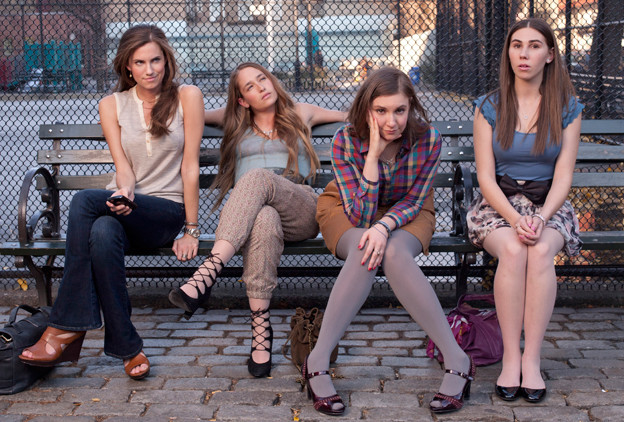 I like girls. Except when I don’t. Sometimes they’re sweet and cuddly. Other times they’re spiteful and selfish. After watching for two seasons on HBO, I’ve decided I love the show Girls. It takes me back to my 20-something days in New York, drinking beer on the stoop and watching my dreams run down the sewer like warm hobo piss. Actually it goes back further than that.

My family got HBO (Home Box Office) in the 70s. Illegally. Back then you’d climb up the telephone pole in your front yard, fiddle with a box of wires connected by coaxial into the house to a bootleg converter that sat on top of the old TV and bam, the TV broadcasted curses!

But cursing was only an appetizer. Something else slithered through that cable. Female nudity. “T&A”. HBO beamed sex comedies with topless ladies on spring break into my pre-pube eye-brain matrix. A “wet t-shirt” contest here. High school pranksters peeping through a hole in the girl’s shower there. America’s puritan ethics shot through a beer funnel of late 70s excess.

Girls. Babes. Fetishized sex objects. Simple, ready and willing. Nobody I knew looked like that. Nobody talked like that. I didn’t fault the films for being unrealistic though; I blamed my dreary, prosaic Long Island suburb for not living up the California ideal.

In the 80s HBO ventured into original scripted fare with of-their-time fodder like Arli$$ and First and Ten – shows as unfunny as they were chauvinistic and sexist. Things changed in the 90s with The Larry Sanders Show. Then Mr. Show. Then Curb Your Enthusiasm. Suddenly you had to have HBO. Subscribers flocked to the original programming, not the stale second-run flicks it presented on repeat. (They still show Larry Crown ten times a month). Eventually the other cable networks jumped on the adult-themed original bandwagon, AMC’s Mad Men and Breaking Bad. It was an American TV renaissance. A new HBO show can be a beacon of interest for series-starved punters.

Tiny Furniture is a character study that eschews classic story arc. It meanders along at it’s own naturalistic pace. There’s no climax or happy ending – perfect structure for a subsequent series. For Apatow, it was development love at first sight.

Girls is about girls and boys in equal measure. Unlike Apatow’s popcorn laffers and the aforementioned 80s “romps” that inspired him, where static female characters serve as foils for the male leads, every guy on Girls has a full inner life and story arc of their own.

Yet Girls was derided even before it debuted. A mock poster for it changing the title to ‘Nepotism’ popped up on a blog (referring to the fact that a few of the actors came from somewhat privileged backgrounds, as if that’s an anomaly in this biz called show). Then the line became Lena Dunham’s an exhibitoinist, more gallingly with a body that did not resemble the Malibu Beach babes of Crown International.

So, in 2013, nudity on HBO is controversial, especially amongst frustrated writers with Documents folders brimming with unreadable spec scripts, whose sole recourse for not having a NEA-granted photographer mom is the comments section of various TV blogs.

Lena’s father, Carroll Dunham, has also stirred dispute over the nude female figure. In one eminent piece of his, a nude woman crawls into the foreground of a green grass and blue sky horizon (its composition like a preschooler’s fridge art), buttocks spread, the focal point being the area known in the US as the taint (my cat has perfected this pose). One imagines little Lena sneaking into her dad’s studio while he’s mixing turpentine and chirping, “Whatchaworkin’ on daddy?”

“Oh, just touching up the butthole, honey, you know, so it pops, and it’s not overshadowed by the bright bulbous labia.”

Dunham not only treats her audience to a healthy portion of epidermis, she presents her emotional vulnerability, her personality flaws, and every mental imperfection like a psychological peep show.  She borrows her quick (but not cutting) wit from Woody Allen, as much as Dorothy Parker and Fran Lebowitz. With Louis CK or Larry David, she shares the ability to dive into awkward and potentially scarring situations with both observational and situational humor.

In the opening scene of the pilot episode, Hannah (Dunham) is introduced as a needy, immature NYC brat begging her parents for more trust funds to help her be a writer. Here she invites your scorn. The journey from her arrogance and entitlement in that first scene to the broken, gutted and OCD-riddled mess at the end of season two is what establishes GIrls as a brave, funny and compelling study of the human condition.

But to some critics, having a main character who is a struggling wannabe writer is too “insular”, (yet somehow being a relationship columnist on Sex and the City is globally relatable). Then there’s the self-indulgence charge, chastising the narrative freedom that allows her to divert from the story line with self contained episodes like the one where she spends the day banging a hot doctor or the one where she manages to make the awful British girl somewhat sympathetic.

Maybe Girls fans and I are the only ones who spent their 20s (and 30s) floundering through sucky jobs, bad or no sex, depression, insanity, backstabbing friends and, yes, that sense of entitlement that made it all harder to swallow. The truth was never pretty and mostly not at all funny. But every day we stand naked in front of the mirror and find a way to accept our bloated, dent-riddled selves.

It’s easy to picture Dunham, had she not made Tiny Furniture, without the fandom of Judd Apatow, in the same position today as Hannah. Not so easy to see Hannah show-running and starring in an acclaimed HBO series.